Son of Naynawa, the master of the frog vaccine Kambo and of the traditional plants, Tsâtsârua Yawanawa is a very talented musician and part of the strong new generation of Yawanawa who make the elders proud for their dedication in the studies of the traditional songs and Yawanawa spirituality. The brothers also work with the kenes, the sacred designs, expressing Yawanawa spirituality in beautiful paintings. 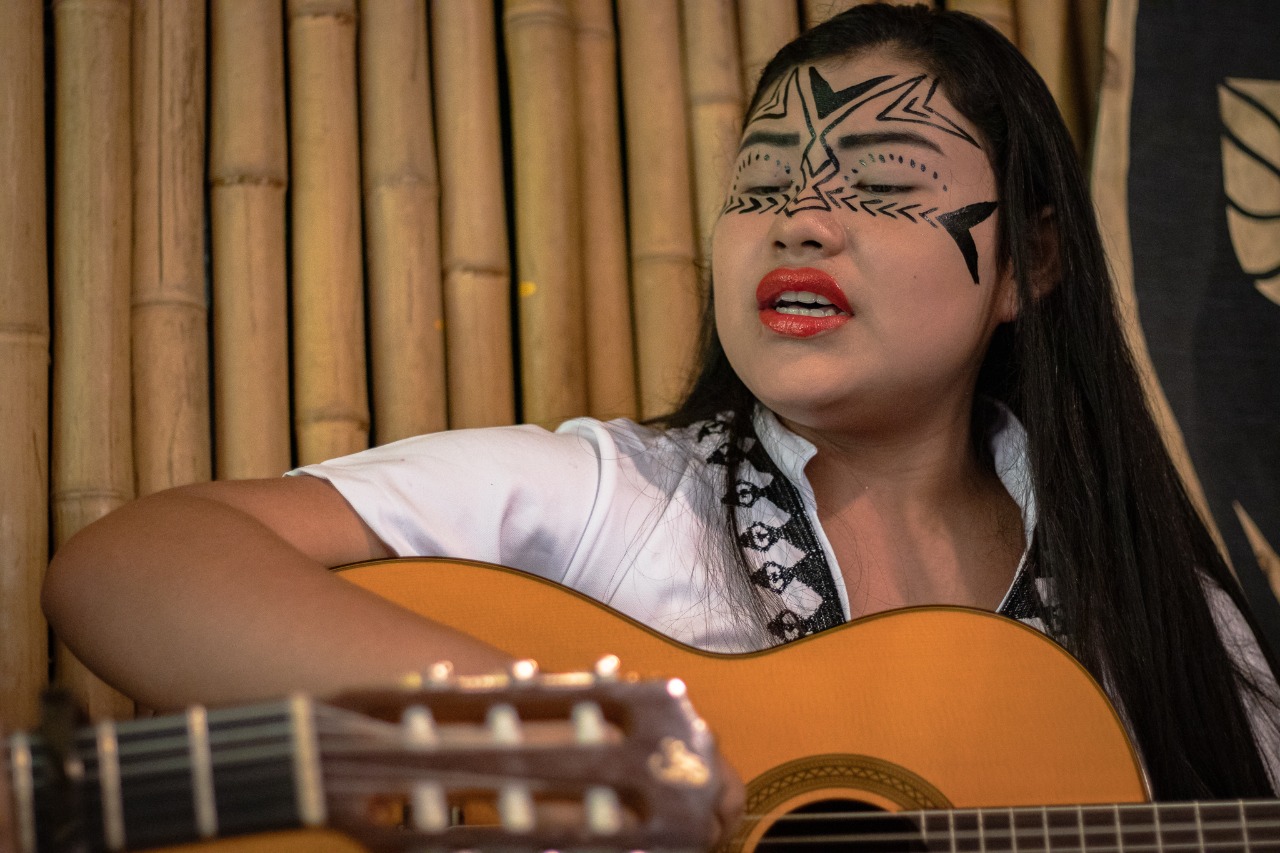 Daughter of Chief of the Yawanawá Tribe

Mukashahu is the youngest daughter of Yawanawa chiefs Nixiwaká and Putanny, she comes from a long lineage of indigenous leaders and medicine men and women and has been raised to be a leader of the Yawanawa people in the future. She lives in the Sacred Village of the Yawanawá people where she learns Yawanawa language, spirituality, history and the songs. From early age she mastered the acoustic guitar and now in her teenager years brings out a strong voice ready to accompany her sisters and her mother. 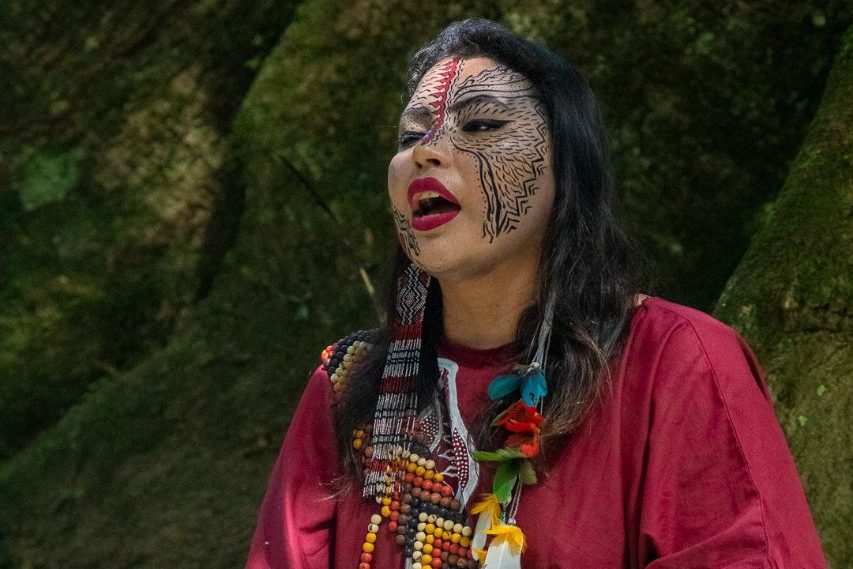 Nawashahu is the eldest daughter of Putanny and Biraci Nixiwaka. She has been brought up to become a leader. Nawa and her sister Ykashahu have been very dedicated to their studies of Yawanawa spirituality, dieting with the elders and always seeking to learn more from the leaders of the tribe. Nawashahu is a guardian of this knowledge and a very talented singer, who has accompanied her parents in their work and travels outside the villages since early ages. 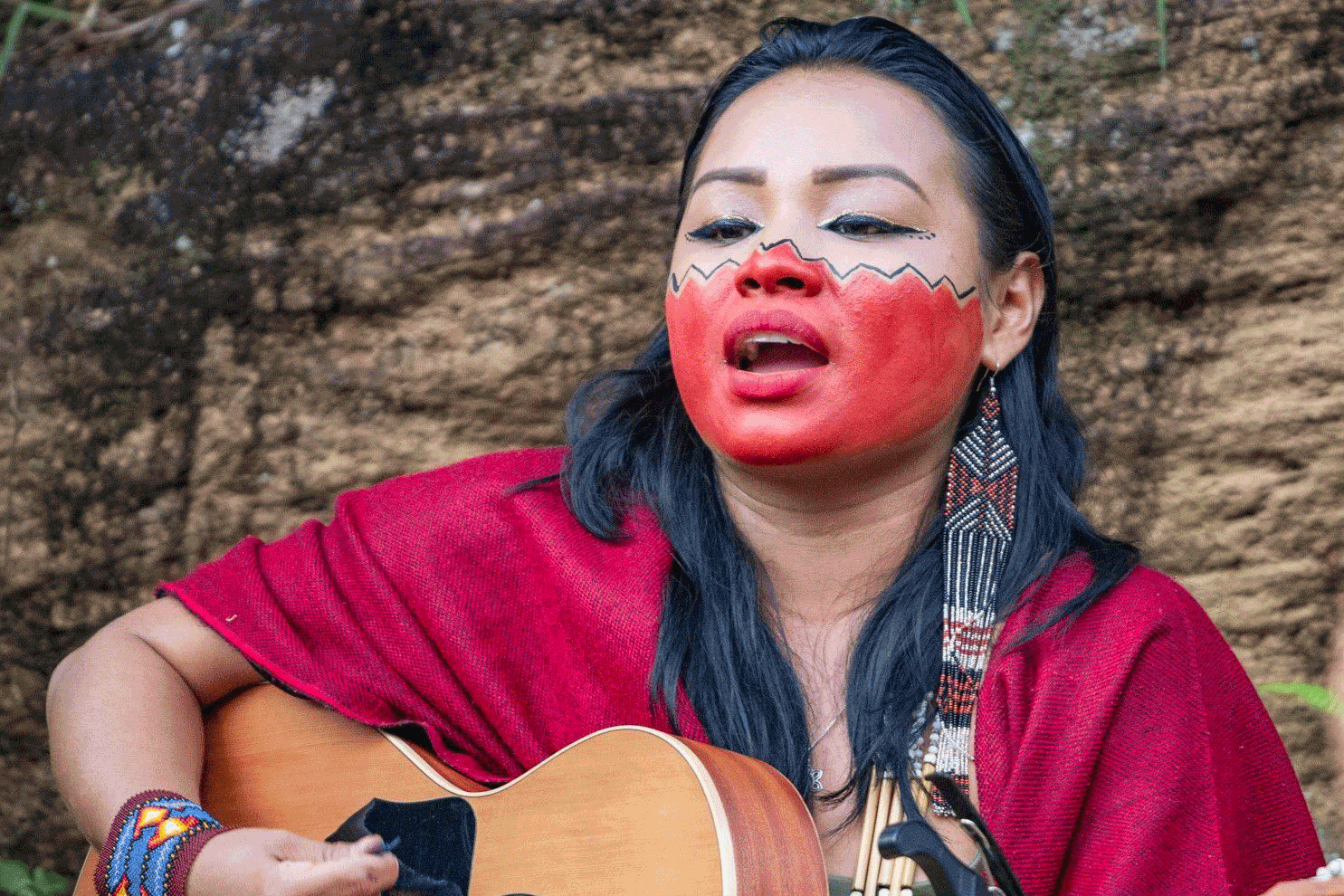 Yka is the middle daughter of Biraci Nixiwaka and Putanny. Since a very young age, Ykashahu has been following the footsteps of her parents, and nowadays travels around Brazil and abroad to share her people’s culture and spirituality. With an amazing voice and beautiful guitar playing, she represents the talented younger Yawanawa generation, as well as the incredible feminine power of the tribe.

Saku is a very powerful medicine man of the Marubo nation in the Amazon Forest of Brazil, although of young age. He is now working with Nixiwaká and Putanny in Yawanawá ceremonies, assisting them in the healing of participants. In the Marubo nation medicine men and women identify the children who will continue their work and they start doing healing work at very young age. Saku started when he was age 4 and recently have successfully healed patients of diseases which their doctors in hospitals told them there was no cure due to its advanced stage.

Biraci Nixiwaká is one of the most relevant indigenous leaders of our time. He has dedicated his life to reclaiming his people’s ancient culture and spirituality. After reconquering the rights over their ancestral territory, Nixiwaka, alongside his family, led the opening of their culture to the outside world. It’s main element is the Yawa Festival, which is held annually since 2002 in the village of Nova Esperança (“New Hope”). In the past years he has spent most of his time in the Sacred Village, dedicated to spirituality and healing, receiving teachings from the elders, in order to carry on the Yawanawa legacy. In his few journeys out of his village to represent his people, he’s also visited other spiritual leaders around the world and has partaken in the sharing of many cultural traditions.

Putanny Yawanawá Daughter of the legendary Yawanawá leader Tuin Kuru, Putanny and her sister Hushahu were the first women of the Yawanawá nation to receive the highest spiritual initiation from the elders. They earned their communities’ respect as spiritual leaders, opening the way into this sacred path for other Yawanawá women. It was a break in tradition that united the male and female universe, and brought the magic of feminine spirituality to strengthen the Yawanawá culture. For this achievement, they received a commendation from the Brazilian senate as recognition of their important role in Brazilian women’s empowerment.

Putanny has an incredible voice and presence, representing her people’s ancestry. She spent a good portion of the past years in the Sacred Village, where she organizes spiritual retreats.

Nixiwaká and Putanny, chiefs of the Sacred Village of the Yawanawá indigenous nation in the Amazon Forest of Brazil, will sing sacred songs of their people. They are coming to the Colibri Spirit Festival with their daughter Ykashahu and Saku who is a medicine man from the Marubo indigenous nation.

The songs will be sung both in the traditional way of the Yawanawá nation which is using only their voices and also with the instruments, guitar and drums.